I make a claim in the About section of this site, and in the Communication Arts article I wrote (Hey, CA, How About a Writing Annual?) that there are no industry awards for best copywriting. Well, I was wrong. Shame on me for not being aware that the D&AD Awards have a category called “Writing for Advertising.” Thank you D&AD, from ad scribes everywhere, for this recognition to our craft.

Here’s a link to this year’s winners. It’s all truly outstanding work. Here’s a great campaign submitted by its writer, Brad Hamilton. (Writers, we’d love for more of you to submit your favorite personal pieces!)

It’s not often that “fun” and “bank client” go together, but it appears that Mobank, a Missouri bank, is a financial institution that appreciates great writing and creativity. If you’re working on a tough bank client, please send them this to illustrate what’s possible. Great writing will add luster to any brand. 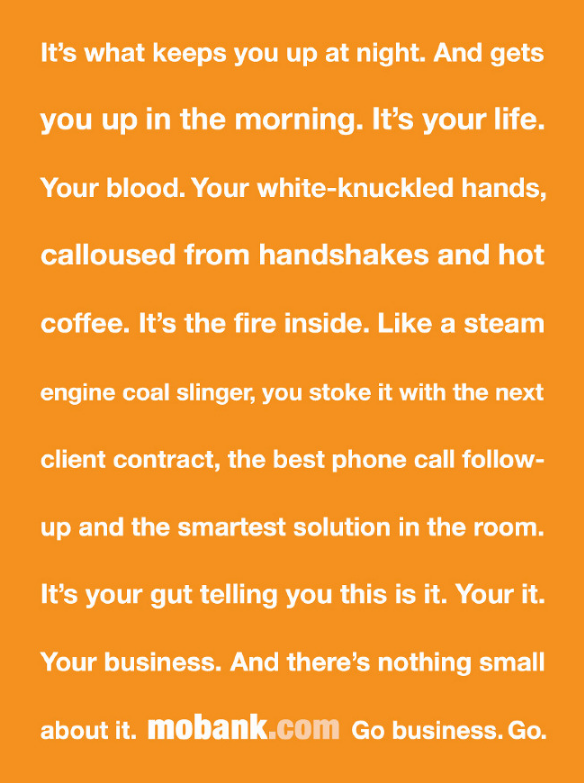 You may have already heard the unfortunate news—the Dos Equis “Most Interesting Man in the World” campaign is ending. In honor of the many writers who’ve kept the campaign so fresh and amazing over the years, I thought it appropriate to publish our first radio commercial post (we’re long overdue for a radio spot on here, being that it’s such a pure writer’s medium). In addition, I’ve found a bunch of the best one-liners from the spots over the years.

He gave his father “the talk.”

Once a rattlesnake bit him, after 5 days of excruciating pain, the snake finally died.

He once went to the psychic, to warn her.

He can speak Russian… in French.

He never says something tastes like chicken.. not even chicken.

Bear hugs are what he gives bears.

He once brought a knife to a gunfight… just to even the odds.

His signature won a Pulitzer.

When a tree falls in a forest and no one is there, he hears it.

Sharks have a week dedicated to him.

In museums, he is allowed to touch the art.

He has taught old dogs a variety of new tricks.

He has won the lifetime achievement award… twice.

When he was young he once sent his parents to his room.

He once had an awkward moment, just to see how it feels.

Mosquitoes refuse to bite him purely out of respect.

His pillow is cool on BOTH sides.

Time waits on no one, but him.

His mother has a tattoo that says “Son.”